Sodium carbonate (also known as washing soda or soda ash), Na2CO3, is a sodium salt of carbonic acid. It most commonly occurs as a crystalline heptahydrate, which readily effloresces to form a white powder, the monohydrate. It has a cooling alkaline taste, and can be extracted from the ashes of many plants. It is synthetically produced in large quantities from table salt in a process known as the Solvay process.

The most important use for sodium carbonate is in the manufacture of glass. When heated to very high temperatures, combined with sand (SiO2) and calcium carbonate (CaCO3), and cooled very rapidly, glass is produced.

Sodium carbonate is also used as a relatively strong base in various settings. For example, sodium carbonate is used as a pH regulator to maintain stable alkaline conditions necessary for the action of the majority of developing agents.[citation needed] It is a common additive in municipal pools used to neutralize the acidic effects of chlorine and raise pH.[1] In cooking, it is sometimes used in place of sodium hydroxide for lying, especially with German pretzels and lye rolls. These dishes are treated with a solution of an alkaline substance in order to change the pH of the surface of the food and thus improve browning.

In taxidermy, sodium carbonate added to boiling water will remove flesh from the skull or bones of trophies to create the “European skull mount” or for educational display in biological and historical studies.

In chemistry, it is often used as an electrolyte. This is because electrolytes are usually salt-based, and sodium carbonate acts as a very good conductor in the process of electrolysis. Additionally, unlike chloride ions which form chlorine gas, carbonate ions are not corrosive to the anodes. It is also used as a primary standard for acid-base titrations because it is solid and air-stable, making it easy to weigh accurately. 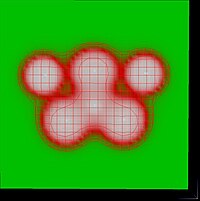 Electron Density of Na2CO3 computed with Ghemical/MPQC at the RHF 6-311G** level of theory. 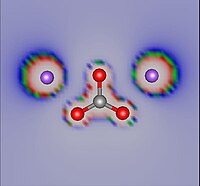 Electrostatic potential of Na2CO3 computed with Ghemical/MPQC at the RHF 6-311G** level of theory.

In domestic use, it is used as a water softener during laundry. It competes with the ions magnesium and calcium in hard water and prevents them from bonding with the detergent being used. Without using washing soda, additional detergent is needed to soak up the magnesium and calcium ions. Called Washing Soda or Sal Soda[2] in the detergent section of stores, it effectively removes oil, grease, and alcohol stains. Sodium carbonate is also used as a descaling agent in boilers such as found in coffee pots, espresso machines, etc.[citation needed]

In dyeing with fiber-reactive dyes, sodium carbonate (often under a name such as soda ash fixative or soda ash activator) is used to ensure proper chemical bonding of the dye with the fibers, typically before dyeing (for tie dyes), mixed with the dye (for dye painting), or after dyeing (for immersion dyeing).[3]

Sodium carbonate is a food additive (E500) used as an acidity regulator, anticaking agent, raising agent and stabilizer. It is one of the components of kansui, a solution of alkaline salts used to give ramen noodles their characteristic flavor and texture.[4][5] Sodium carbonate is also used in the production of sherbet lollies. The cooling and fizzing sensation results from the endothermic reaction between sodium carbonate and a weak acid, commonly citric acid, releasing carbon dioxide gas, which occurs when the sherbet is moistened by saliva.

Sodium carbonate is used by the brick industry as a wetting agent to reduce the amount of water needed to extrude the clay.[citation needed]

In casting, it is referred to as “bonding agent” and is used to allow wet alginate to adhere to gelled alginate.[6]

Sodium carbonate is used to encapsulate and kill mold. When mixed with water and put in a spray bottle, it is sold for its anti-mold cleaning ability. It is also used to blast off mold from wood or other materials.[citation needed]

Sodium carbonate is used in toothpastes, where it acts as a foaming agent, an abrasive, and to temporarily increase mouth pH.

The crystalline form of washing soda can be used to induce vomiting in dogs. A tablespoon for large breeds is sufficient to force the animal to empty the contents of its stomach.

Sodium carbonate may be used for safely cleaning silver. First, aluminium foil is added to a glass or ceramic container, and covered with very hot water and some sodium carbonate. Silver items are dipped into this “bath” to clean them, making sure the silver makes contact with the aluminium foil. Finally, the silver is rinsed in water and let to dry.[7]

Trona, hydrated sodium bicarbonate carbonate (Na3HCO3CO3·2H2O), is mined in several areas of the United States and provides nearly all the domestic sodium carbonate. Large natural deposits found in 1938, such as the one near Green River, Wyoming, have made mining more economical than industrial production in North America.

It is also mined out of certain alkaline lakes such as Lake Magadi in Kenya by using a basic dredging process and it is also self-regenerating so will never run out in its natural source.

Several “halophyte” (salt tolerant) plant species and seaweed species can be processed to yield an impure form of sodium carbonate, and these sources predominated in Europe and elsewhere until the early 19th Century. The land plants (typically glassworts or saltworts) or the seaweed (typically Fucus species) were harvested, dried, and burned. The ashes were then “lixiviated” (washed with water) to form an alkali solution. This solution was boiled dry to create the final product, which was termed “soda ash;” this very old name refers to the archetypal plant source for soda ash, which was the small annual shrub Salsola soda (“barilla plant”).

The sodium carbonate concentration in soda ash varied very widely, from 2-3% for the seaweed-derived form (“kelp“), to 30% for the best barilla produced from saltwort plants in Spain. Plant and seaweed sources for soda ash, and also for the related alkali “potash,” became increasingly inadequate by the end of the 18th Century, and the search for commercially-viable routes to synthesizing soda ash from salt and other chemicals intensified.[10]

In 1791, the French chemist Nicolas Leblanc patented a process for producing sodium carbonate from salt, sulfuric acid, limestone, and coal. First, sea salt (sodium chloride) was boiled in sulfuric acid to yield sodium sulfate and hydrogen chloride gas, according to the chemical equation

Next, the sodium sulfate was blended with crushed limestone (calcium carbonate) and coal, and the mixture was burnt, producing calcium sulfide.

The sodium carbonate was extracted from the ashes with water, and then collected by allowing the water to evaporate.

The hydrochloric acid produced by the Leblanc process was a major source of air pollution, and the calcium sulfide byproduct also presented waste disposal issues. However, it remained the major production method for sodium carbonate until the late 1880s.[10][11]

In 1861, the Belgian industrial chemist Ernest Solvay developed a method to convert sodium chloride to sodium carbonate using ammonia. The Solvay process centered around a large hollow tower. At the bottom, calcium carbonate (limestone) was heated to release carbon dioxide:

At the top, a concentrated solution of sodium chloride and ammonia entered the tower. As the carbon dioxide bubbled up through it, sodium bicarbonate precipitated:

The sodium bicarbonate was then converted to sodium carbonate by heating it, releasing water and carbon dioxide:

Meanwhile, the ammonia was regenerated from the ammonium chloride byproduct by treating it with the lime (calcium hydroxide) left over from carbon dioxide generation:

Because the Solvay process recycled its ammonia, it consumed only brine and limestone, and had calcium chloride as its only waste product. This made it substantially more economical than the Leblanc process, and it soon came to dominate world sodium carbonate production. By 1900, 90% of sodium carbonate was produced by the Solvay process, and the last Leblanc process plant closed in the early 1920s.

Developed by a Chinese chemist Hou Debang in 1930s. It is the same as the Solvay process in the first few steps. But, instead of treating the remaining solution with lime, carbon dioxide and ammonia is pumped into the solution, and sodium chloride is added until it is saturated at 40 °C. Then the solution is cooled down to 10 °C. Ammonium chloride precipitates and is removed by filtration, the solution is recycled to produce more sodium bicarbonate. Hou’s Process eliminates the production of calcium chloride and the byproduct ammonium chloride can be used as a fertilizer.