Jump to: navigation, search For other uses, see Borax (disambiguation).

Borax, also known as sodium borate, sodium tetraborate, or disodium tetraborate, is an important boron compound, a mineral, and a salt of boric acid. It is usually a white powder consisting of soft colorless crystals that dissolve easily in water.

Borax has a wide variety of uses. It is a component of many detergents, cosmetics, and enamel glazes. It is also used to make buffer solutions in biochemistry, as a fire retardant, as an anti-fungal compound for fiberglass, as an insecticide, as a flux in metallurgy, and as a precursor for other boron compounds.

The term borax is used for a number of closely related minerals or chemical compounds that differ in their crystal water content, but usually refers to the decahydrate. Commercially sold borax is usually partially dehydrated.

Sodium borate is used in biochemical and chemical laboratories to make buffers, e.g. for gel electrophoresis of DNA, such as TBE or the newer SB buffer. Borate buffers (usually at pH 8) are also used as preferential equilibration solution in DMP-based crosslinking reactions.

Borax as a source of borate has been used to take advantage of the co-complexing ability of borate with other agents in water to complex various substances. Borate and a suitable polymer bed are used to chromatograph non-glycosylated hemoglobin differentially from glycosylated hemoglobin (chiefly HbA1c), which is an indicator of long term hyperglycemia in diabetes mellitus. Borate and a proprietary synthetic amino acid, Deselex (from Henkel) have been used to complex water “hardness” cations to make a non-precipitating water “softener”. Borate alone does not have a high affinity for “hardness” cations, although it has been used for that purpose.

A mixture of borax and ammonium chloride is used as a flux when welding iron and steel. It lowers the melting point of the unwanted iron oxide (scale), allowing it to run off. Borax is also used mixed with water as a flux when soldering jewelry metals such as gold or silver. It allows the molten solder to flow evenly over the joint in question. Borax is also a good flux for ‘pre-tinning’ tungsten with zinc – making the tungsten soft-solderable.[1]

Borax is replacing mercury as the preferred method for extracting gold in small-scale mining facilities. The method is called the borax method and was first discovered in Sweden and used in the Philippines. [2]

When a borax-water solution is mixed with PVA glue (wood glue), a rubbery precipitate is formed which is the result of cross-linking in the polymer.[3]

Borax, given the E number E285, is used as a food additive in some countries but is banned in the United States. In consequence certain foods, such as caviar, produced for sale there contain higher levels of salt to assist preservation.[4] In China it was found to have been added to hand-pulled noodles (lamian).[citation needed] In Indonesia it is a common, but forbidden, additive to such foods as noodles, meatballs and steamed rice. The country’s Directorate of Consumer Protection warns of the risk of liver cancer with high consumption over a period of 5–10 years.[5]

Borax occurs naturally in evaporite deposits produced by the repeated evaporation of seasonal lakes. The most commercially important deposits are found in Turkey and near Boron, California and other locations in the Southwestern United States, the Atacama desert in Chile, and in Tibet. Borax can also be produced synthetically from other boron compounds.

Borax, sodium tetraborate decahydrate, is not acutely toxic. [6] Its LD50 (median lethal dose) score is tested at 2.66 g/kg in rats. [7] This does not mean that it is safe, merely that a significant dose of the chemical is needed to cause severe symptoms or death. The median lethal dose for humans tends to differ for a given compound from that of rats. Simple exposure can cause respiratory and skin irritation. Ingestion may cause gastrointestinal distress including nausea, persistent vomiting, abdominal pain, and diarrhea. Effects on the vascular system and brain include headaches and lethargy, but are less frequent. “In severe poisonings, a beefy red skin rash affecting palms, soles, buttocks and scrotum has been described. With severe poisoning, erythematous and exfoliative rash, unconsciousness, respiratory depression, and renal failure.” [8]

A reassessment of boric acid/borax by the United States Environmental Protection Agency Office of Pesticide Programs found potential developmental toxicity (especially effects on the testes).[9] Boric acid solutions used as an eye wash or on abraded skin are known to be especially toxic to infants, especially after repeated use because of its slow elimination rate.[10] 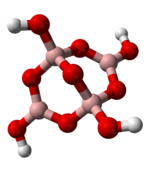 The term borax is often used for a number of closely related minerals or chemical compounds that differ in their crystal water content:

Borax is also easily converted to boric acid and other borates, which have many applications. If left exposed to dry air, it slowly loses its water of hydration and becomes the white and chalky mineral tincalconite (Na2B4O7·5H2O).

When borax is added to a flame, it produces a yellow green color.[11] This property has been tried in amateur fireworks,[citation needed] but borax in this use is not popular because its waters of hydration inhibit combustion of compositions and make it an inferior source of the boron which is responsible for most of the green color, and which is overwhelmed by the yellow contributed to the flame by sodium.